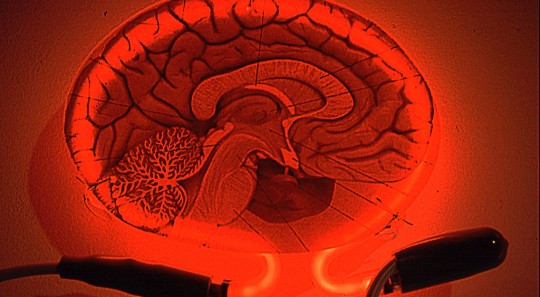 Their task isn’t suited to automation, so that’s why it’s really important to find out if there are ways to help them focus for a longer period of time.

Scientists at the Air Force Research Laboratory in New Carlisle, Ohio, U.S., have conducted research on 18- to 42-year old men and women on active duty.

Military staff put to the test

The researchers kept 30 of these military analysts awake, and tested their reaction time every two hours. The test ran for a total of 30 hours.

At 4am, when people’s cognitive performance is usually at its worst, the researchers gave the subjects two things: a gum that contained caffeine, and electrical brain stimulation.

However, these 30 people were divided in 3 groups:

The brain stimulation used was a procedure called transcranial direct current stimulation (tDCS), whereby a low current is delivered directly to the brain by electrodes that are placed on the scalp.

The current is extremely mild and barely noticeable to the user. It’s even possible to carry out tasks while undergoing transcranial stimulation.

Both groups, the “caffeine” group and the “brain stimulation” group, got a boost in their cognitive performance and ability to focus.

But the electrical brain stimulation improved performance twice as much as the caffeine.

The third group did not show an increase.

At 8 am, four hours after the boost, the group who received the brain stimulation scored 60% on a vigilance test.

In comparison, the performance of the other groups, the group with caffeine plus fake electrical stimulation, and the test group with only placebo’s, declined rapidly.

So, caffeine had a rapid cognitive effect, but it wore off after 2 hrs.

Half an hour of brain stimulation on sleep-deprived military staff improved their performance twice as much as caffeine. And the effect lasted three times as long.

“I think the reason we’re getting these long-term effects is they are making some longer-lasting changes to the neural connections.”