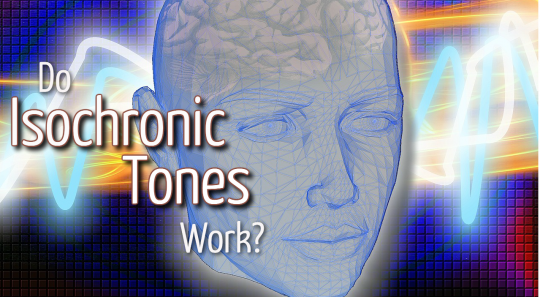 Do isochronic tones work at all?

Many results and benefits are being claimed from using isochronic tones (and brainwave entrainment in general). From stress reduction, relaxation, deeper meditation, over increased memory, better concentration and more creativity, to altered states of consciousness (including lucid dreaming).

Many people however find it hard to believe that these results are possible.

Is it because this technology is not very well known, nor widely promoted or accepted, that  there is still doubt – even distrust – as to whether isochronic tones (and brainwave entrainment in general), really work?

Let’s have a look at whether isochronic tones deserve this mistrust. The following article will be a mix of scientific research and subjective experiences.

When asking the question “Do isochronic tones work?”, I feel we have to discern between a couple of things.

There are really three questions:

Do isochronic tones have entraining effects on the brain?

This study however specifically talks about auditory stimuli:

Brain wave synchronization and entrainment to periodic acoustic stimuli.
Will U, Berg E.

Specifically, we found (1) a tonic synchronization response in the delta range with a maximum response at 2 Hz, (2) a phasic response covering the theta range, and (3) an augmented phase synchronization throughout the beta/gamma range (13–44 Hz) produced through increased activity in the lower gamma range and modulated by the stimulus periodicity.

Then, there are some more studies about the audio and visual combo. Here are a few:

Bear in mind that all of these studies were done with devices that combine the isochronic tones with visual stimuli (light flashes). Visual stimuli are a powerful entrainment method as well (even more powerful than auditory stimulation).

Do these sessions have an effect AFTER the moment of listening?

Some people say that this entrainment is not very valuable beyond the moment of listening itself (when the entrainment happens).

In other words, they doubt there are any effects in the longer term.

When I say “longer term”:

Why is this question important? Well, if we can reproduce the effect, we might be able to “use” this mind state later on when we need it.

Is there a residual after-effect after a session?

I have only personal experience here to draw from here. To me, it feels that, immediately after a session in a certain frequency, my brain “pops out” of the frequency. Showing thus no entrainment beyond the actual session.

This makes total sense for me. My experience is that, after some time spend in a certain frequency, my brain wants to go to the other extreme. For example, if my session was a relaxing one, it makes sense that I would be rested and charged, ready to rock’n’roll again. If I were in a concentrative session (studying for example), and have intensely focused for a while, the natural tendency would be to go into a relaxed mode.

Again, this is only my experience. Subjective. Other’s people experience might be different.

Can we reproduce the same state AFTER the session, at a later time?

That’s exactly what biofeedback is all about.

Some of the processes that can be controlled include brainwaves…
Eventually, these changes may be maintained without the use of extra equipment, for no equipment is necessarily required to practice biofeedback.

So the answer is yes. Whether you’re in front of a biofeedback machine, learning to ‘remember’ a particular state of mind, or whether your brain is fed specific brainwaves through isochronic tones or a mind machine,… by just entering that state, you can learn to reproduce it.

(On a side note: ‘anchors’, as they are used in NLP are also a way to re-live a certain state.)

Can we produce the results that are claimed (such as increased memory, increased focus etc…)?

This really follows from the previous point. If you can reproduce the brainwave state of your brain, the accompanying state of mind will be present as well.

After all, this is exactly what biofeedback is all about. Well, to put it even more simpler: this is what “learning” is all about, no?

It makes total sense that you can train your mind/brain/body. With practice. In the same way that experienced meditators show a different kind of brain activity, compared to people beginning with meditation.

The changes in your brain that result from years of mindfulness and meditation practices can be staggering.

Proof of this is the research of dr. Josipovic, in which the brains of Buddhist monks were scanned with fMRI machines while they were meditating:

“…research, particularly in the last 10 years or so, has shown to be very promising because it points to an ability of the brain to change and optimise in a way we didn’t know previously was possible.” – Dr Zoran Josipovic

And as neuroscientist and meditation researcher, Richard J. Davidson told the Washington Post:

“What we found is that the longtime practitioners showed brain activation on a scale we have never seen before.”

If you can “train your brain” or “train your mind”, then that simply means that results are achievable by focusing and intent.

As Tom Stafford, a lecturer in psychology at the University of Sheffield, points out in his book “The Rough Guide to Brain Training“:

“Humans are amazing at getting better at anything they practice.

We’re the learning species – if you want to learn pi to a hundred digits in a weekend, or to memorise a deck of cards or master Ancient Greek, you can.”

But what makes some people more successful than others with these tones?

Some might be more successful than other in certain fields.

Is it because some are more genetically inclined, or maybe it’s just not in their make-up (their blueprint for life) to achieve some specific results. Who knows?

In any case, there do seem to be more factors present.

And all of these make it hard to determine what will work and what not.

For example, when I was 18 y/o I tried hard to create an Out of Body Experience (OBE) for myself. I could not.

I realized back then that this was so, because OBE’s were really not in my best interest! On the contrary. What I needed back then, instead of an OUT-of-body experience, was an IN-the-body experience 🙂 I needed to get out more, walk more, be in nature, feel my physical body.

If you’re imbalanced like that, you can push all you want, but I doubt it’s going to happen.

Some things DID happen though, I was having strange, vivid, dreams. So something was shifting. But beyond that: no. You can only push the river so much. You can only stretch that rubber band so much.

It also depends on the goal

Some goals are easily ‘identified’ when reached.

It’s easy for instance to say you’ve reached relaxation. You know it, you feel it. And even though it’s a subjective feeling, we could also quantify it, by using machines that acknowledge this relaxed state (we can see it on an EEG device, or look at your heart rate or galvanic skin response (GSR).

Knowing you’ve reached a goal, is a bit harder with goals such as ‘being more creative’, ‘better learning’. There are going to be the subjective stories of people claiming they feel improvements in these areas, but how do you see that on an EEG device?

‘Relaxation’ is mostly characterized by brainwave activity with a lot of alpha waves. You can easily select isochronic tones with an alpha frequency, and you will be more relaxed.

But I’m guessing ‘creativity’ or ‘superlearning’ are a bit more complex to map out. There are probably combinations of frequencies occuring at the same time, in different specific locations of the brain.

Do mind machines work as well?

As a sidenote to what we looked at for isochronic tones: all of the above conclusions really apply to mind machines as well.

Mind machines are small devices for personal use that combine isochronic tones with the visual stimulation of flashing ligjhts.

What’s the advantage of using visual stimulation, for example in the form of flashing lights?

So, obviously, when combining these two, the results can even be greater.

Some things can increade the likelihood that they “work” for you. It’s worthwhile to remember when using isochronic tones that:

Too high pitched sounds can be distracting or even irritating no matter how “relaxing” the rhythm is (e.g. theta or alpha frequency). Also, frequencies that are too low can be disturbing.

While in theory some sounds are more effective, if in the end, you find you have a personal aversion for them, the desired brain entrainment will not happen.

That doesn’t necessarily mean you have to choose another sound. Try turning the volume down for starters and see how you go.

I said “in the end”, because sometimes you do have to stick with something when trying something new. Don’t just drop something based on an emotional whim of the moment. Give new experiences a fair shot.

Isochronic tones are less effective when trying to entrain the brain at frequencies below 4 Hz. The brain responds better to higher frequencies (such as alpha: 8 – 12 hz). This doesn’t mean you should not try out a delta frequency (0- 4 hz), but you should just be aware of the fact that entrainment may be less if you try it at low frequencies.

Conclusion: real, but not a magic bullet

Isochronic tones are not a magic bullet or push button solution, but the brainwave entrainment they produce is real, in fact anyone with an EEG can show the actual effects on the brain.

There is an increasing number of intelligent doctors who recommend this technology for children to use as an alternative to Ritalin and other harmful substances.

There are also some well-known clinics (like the Berlin Charité University Hospital in Germany) who have done studies with brainwave entrainment.

In 2009, Prof. Dr. Gerhard J. Müller of the “Berliner Charité” hospital put the mind machine “DAVID PAL36” to the test in a clinical study.

(Prof. Dr. Müller is a scientist at the Charité – University Hospital in Berlin, Germany, and, in his capacity as an expert in the fields of laser medicine, biomedical engineering and medical physics, also a publicly appointed and sworn expert of the Chamber of Commerce of Berlin for optoelectronic devices.)

He concluded in his report:

“the “DAVID PAL36 with CES” is suited for stimulation of the brain activity.

In particular, when choosing stimulation frequencies within the range of the brain, resonant reactions arise, which could then be used therapeutically.

Patients with established neurological disorders, such as parkinson, apoplexy or ADD, could therefore use the device with their doctor’s consent.”

(my translation from german)

Note: the “DAVID PAL36” is an old device. It has been superseded by the newer DAVID Delight Pro.

So why has brainwave entrainment not become more well known?

I’d like to end with these words, which I think are well written and put forward some good ideas:

There is over 70 years of solid research behind brainwave entrainment . So why hasn’t it become more well known?

Mainly because our culture is very much dependent on drugs, and, in comparison to the pharmaceutical giants, there is not a lot of money to be made in entrainment: it is inexpensive, easy to use at home and can be a viable solution to a huge variety of problems.

Also, the idea that software or an inexpensive piece of hardware is able to directly affect the brain sounds preposterous at first, until you read the research and discover the science behind it.

We have found that most people are skeptical until the day they actually use the software. Despite the combination of solid scientific, empirical and a huge amount of anecdotal evidence, the world is still very skeptical of entrainment and brain training. But the word is spreading.

— The Da Vinci Method. Brainwaves: The Science. A Brief History of Brainwave Entrainment

One Response to Do Isochronic Tones Work?