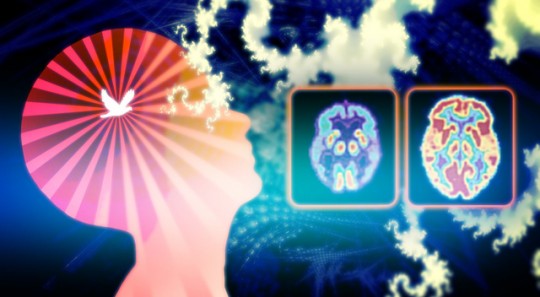 Binaural beats are a popular way of training your brain to produce brainwaves of a certain frequency.

Each frequency comes with its own “brain state”

For example: if you stimulate your brain with “alpha waves” (frequencies between 8 and 12 hz), the result would be that you feel more relaxed and less anxious/stressed.

And if you present your brain with frequencies in the “theta” range, you might experience drowsiness and sleepiness.

The brainwaves and their accompanying states:

The tendency of the brain to “fall in step” with a presented stimulus is called “entrainment”. And binaural beats are by far the most popular way to “entrain” the brain. There are a lot of binaural beat cd’s and tracks being sold on the internet (and sometimes at a high price!).

How are binaural beats produced?

Binaural beats are created by presenting two different tones at slightly different pitches (or frequencies) separately into each ear. The effect of a third frequency is produced within your brain itself.

But how effective are binaural beats really?

This article by Dave Siever from MindAlive.com (a producer of “Audio-Visual Entrainment machines”) claims that binaural beats don’t work as well as people seem to think:

“Binaural beats are not very noticeable because the modulation depth (the difference between loud and quiet) is 3 db, a two-to-one ratio. … This means that binaural beats are unlikely to produce any significant entrainment because they don’t activate the thalamus.”

To compare: isochronic tones and monaural beats have a 50 db difference between loud and quiet. Which is a 100,000-to-1 ratio.

He also cites studies that clearly show the little entrainment binaural beats provide to the brain. His conclusion:

“Binaural beats cannot generate entrainment because, as two steady tones, they do NOT impact the thalamus.”

In my own experience, binaural beats did produce an effect. In my early twenties I was a bad sleeper and with the help of a binaural beat cd, I learned how to sleep deeper during the night. I also taught myself to have naps during the day (something which was next to impossible for my nervous personality back then!).

And some 10 years after that, that same cd erased my partner’s regular trouble to fall asleep at night.

Ok, not scientific proof as such: it might be a placebo effect at work, or just the fact of taking time out to relax and listen to the cd helped a lot. But fact is: my partner and I greatly benefited from it.

And not just us, many other people around the globe have had similar successes. One proof of that statement is the amount of testimonials of “The Gateway Program”.

The Monroe Institute’s Gateway Program is a 6 day course in which “hemi-sync” tapes are used to induce meditative states and altered states of consciousness in participants.

(Hemi sync is exactly the same technology as binaural beats, it’s just the proprietary name for the in-house produced tapes and cd’s at the Monroe Institute.)

The Gateway Program has, over the years (since the seventies), helped numerous people reach different levels of human consciousness, including states in which they claim to have experienced out-of-body experiences, visited other “reality systems” or had “contact with deceased family members”.

Watch a short intro to the gateway program and people’s experiences with hemi-sync:

Personally, I have no doubt that at least some entrainment is produced with binaural beats technology (such as hemi sync).

“The study by Lane, however, indicated that during beta frequency binaural stimulation, participants performed better than during theta stimulation.”

“The study by Le Scouarnec suggested a reduction in anxiety with theta binaural beats.”

The conclusion is that studies examining binaural beat entrainment have yielded inconsistent results.

‘results were not supportive of the specific efficacy of the theta binaural beat training employed in this study in either increasing frontal theta EEG activity or in increasing hypnotic susceptibility.

We did not find support for steady-state entrainment of the scalp-recorded EEG while listening to 7-Hz binaural beats. Although our data indicated increased depression and poorer immediate recall after listening to binaural beats, larger studies are needed to confirm these findings.

Binaural beats don’t work as well as these alternatives

But the point that Dave Siever is making is that, of the three auditory ways to entrain the brain:

…binaural beats are the least effective of all.

“Monaural beats, however, do impact the thalamus, and therefore the cortex, because they are in beat form before they strike the ear drum.”

Monaural beats, or monaural tones, are produced by mixing two tones of different frequencies, but (contrary to binaural beats) this occurs outside of the ears.

(It happens in the air when played through loudspeakers, or it takes place in the mixing device that sends the sound through the headphones to the ears.)

Monaural beats are an effective way of producing entrainment. Siever:

“EEG studies of monaural beats have conclusively shown that monaural beats produce a frequency following response in the contralateral hemisphere of the brain, and therefore are entraining.”

The third form of auditory entrainment are isochronic tones. Said to be the most effective type of auditory brainwave entrainment, because of the distinct “on and off” impulses they provide to the human ear.

What they are (from wikipedia):

Isochronic tones are regular beats of a single tone. An isochronic tone is a tone that is being turned on and off rapidly. They create sharp, distinctive pulses of sound. The volume or intensity of the sound goes almost directly from 0 to 100 and back again in an evenly-spaced manner. They differ from monaural beats, which are constant sine wave pulses rather than entirely separate pulses of a single tone.

The difference with monaural tones is that isochronic tones are rather sharp tones. Monaural beats turn on and off more gently and therefore are smoother beats. Some people can find the isochronic pulse tones too stimulating.

Note: the most efficient form of entrainment is actually not auditory, but visual.

When comparing flashing light with evenly spaced auditory tone pulses (isochronic tones), it was found that with:

So, what if you could have both, auditory and visual? That’s exactly what mind machines do. The unique combination of both these entrainmant modalities make them probably the most efficient tool on the market today for brainwave entrainment.

So why do many people still insist on using binaural beats?

I don’t know. Maybe because they’re the easiest to find on the market?

Personally, I still use them too. At some times I like them more because they’re “gentler” and not as invasive as the isochronic tones. They can be more pleasant to listen to.

Dave Siever’s newest devices also have, besides the standard isochronic tones and light pulses they provide, the possibility to include monaural as well as binaural beats into the mix that reaches your ears. So he must think these binaural beats have at least some efficiency.

Conclusion: throw away all your binaural beats tracks?

That won’t be needed.

But the advice I do take from this research is to play any binaural beats through loudspeakers. In that way you’re effectively transforming them into monaural beats, which are far more effective.

sources: all quotes by Dave Siever