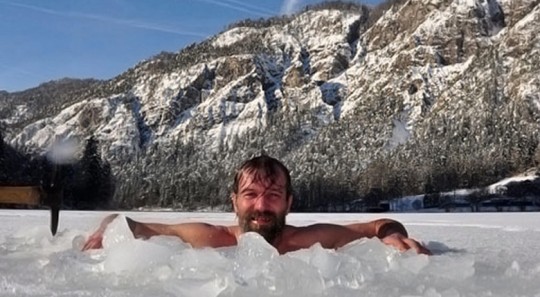 How the Wim Hof Method was born…

For a long time now, he had been feeling unhappy, and uninspired. His life missed ‘spark’.

Emotionally, as well as physically. He felt weak and lacking in energy every day.

And this had been the way ever since he was born.

It was a beautiful winter morning

Wim was strolling through the local park, when he noticed there was a thin, bright sliver of ice on top of the pond.

It sparkled in the morning sun. And to him, it seemed like it was beckoning him.

He looked around to see if there were any people… and then quickly undressed and got into the ice cold water!

What he felt at that moment was difficult to describe

“I felt soo powerful. Mentally, as well as physically. The emptiness inside gave way to warmth. It was like I became connected with everything around me.” – Wim Hof

Breathing heavily, life was soaring through his veins. At that moment, he felt like the cold “awoke his inner fire”.

On top of that, he also experienced memory flashes from his traumatic birth (he was pulled out of his mother’s womb in a cold hospital hallway).

In short, he had a transformational moment that would decide the course of the rest of his life.

It’s not that Wim Hof was special

No, he was an ordinary guy, with a wife and children, who just happened to feel helpless and unhappy in life.

But that event had changed him. It was an intense healing moment, and since then, he had found his purpose in life.

From that point on, he devoted his life to find his inner power. Through exposure to the cold, as well as through breathing and other exercises.

The cold became like a mirror for his personal power. He immersed himself totally in this exploration and finetuned his method.

And while he was in the process of doing this, he caught the attention of many people. That’s because he performed what they called ‘superhuman’ feats.

People even nicknamed him “The Iceman”.

A few examples of the things he achieved:

he climbed Mount Everest in nothing but shorts and shoes, and he ran a half marathon barefeet (and in only shorts) in the arctic circle of Finland in midwinter…

He now carries 20 Guinness World Records, including the farthest swim under ice and the longest ice bath (just under 2 hrs).

Working together with science

Recently, he has been collaborating with the scientific, academic world to provide proof for the benefits his method has on the human body.

“Wim Hof, the Iceman. From circus artist to scientist.”

It’s not about the cold

As Wim Hof says,  he hadn’t set out on this path to obtain any world records. (To a certain extent, he now even considers these to be “circus acts”.)

For him, it’s not about  about “proving something” or about external confirmation.

And it’s not even about “coping with the cold”. The cold is not a goal in itself.

No, the cold is just a mirror.

A mirror for your health & inner power

For Wim Hof, his method is a way to take back our “inner power” and improve our health.

That’s where the real ‘gold’ is.

The most impressive part of this whole story is the fact that everybody can perform such feats. Not just Wim Hof.

With commitment and focus, everyone can do it. (If these ‘ill’ people can do it, everybody can.)

It puts into question what we think is possible. It challenges our limits.

Who is the Wim Hof method for?

This method is basically for everyone who wants to “power up” on their own inner strength.

It’s for anyone who wants to increase the sense of ‘feeling alive’ and enhance their wellbeing and “well feeling”.

So it’s not just for extremists…

But rather, it’s about exploring what you’re capable of.

If you’re ready to put the limits you impose on yourself into question, and want to discover your potential, then you can benefit.

Using this method to heal yourself

People also use this method to heal themselves

There are scientific indicators that this method can help people to become healthier. (More about that in a minute.) That’s why people are actively using this method to find healing and relief for their condition (like for example rheumatoid arthritis and parkinson’s disease).

How is this possible?

It’s not really surprising that people experience real change through this method. The benefits of “activating your fire” have been known for thousands of years.

Tummo is such an ancient (Tibetan Buddhist) meditation practice with that goal: to awaken your “inner fire”.

This fire or inner warmth is responsible for many things.

On the physical level it increases the temperature of our bodies, the heat of digestion and metabolism (the heat that powers chemical reactions and builds hormones).

But Tummo is much more than that:

And it’s this same fire that is stimulated in the Wim Hof Method as well.

Nature as a teacher

Wim Hof never had formal Tummo training, but rather: he developed his method out of his own experiences with “cold, hard nature”.

Let’s have a look at the benefits that have been seen to occur:

So how does the Wim Hof Method achieve these benefits? What does it consist of?

Let’s look at he method in detail.

The method in detail

There are 3 parts to the method:

This is a breathing technique that generates heat in your body and ‘awakens the fire’ in you. When practiced regularly, people literally report feeling warmer during their days.

Watch an explanation of the technique here:

(This is an intro video to the method, where Wim Hof shows how powerful the breathing technique is, by means of doing simple push ups. The breathing increases your strength. You can literally do more push ups in combination with this breathing method!)

To deliberately ignite the fire in you, and to keep devoting yourself to the exercises in order to reap the benefits, you need commitment and focus.

This is about challenging yourself to get out of your comfortzone.

By doing the exercises and focusing, you learn that you can move your boundaries. Up until you get to the point where you don’t need as much effort anymore. Where things go “by themselves”.

The exercises and guidance of Wim Hof help you in a step-by-step way with that transition.

One practical way of doing this, is to end your normal (hot) showers with cold water. You need focus for that, as well as a commitment to conquer your fear:

After the breathing exercise (as well as meditation and other exercises) you’re ready for the next step.

Through gradual exposure to cold showers you improve your cardiovascular system: your veins are like little muscles that can be trained to pump blood (and warmth) through your skin and to the extremities of your body. These veins literally grow stronger.

Gradually working your way up

You can start by taking a cold-ish shower after a normal hot one. And gradually, day by day, you set the temperature a little colder.

You’ll see that your body gets used to it more and more. It starts to recover from the initial cold shock more efficiently and it is able to warm up your body parts more quickly.

And, more importantly, all this helps your body prevent future diseases.

Is there any “proof” to the Wim Hof Method?

This method has a deep effect on the cardiovascular system and the autonomous nervous system. The video in the beginning of this article already showed that this method is being researched actively by academics:

A may 2014 study (that was realized in part due to a grant from the Netherlands Rheumatism Fund), concluded that, by practicing this method, people are able to influence the autonomic nervous system (and thus their immune system) with their will.

That was something that was thought to be impossible up until then.

These results basically force a rewrite of any chapters in academic textbooks that talk about the nervous and the autonomous system (and this is NOT exaggerating).

This method is so new, and the last study was from early 2015. But since then, new grants have been applied for (by the VU University Medical Center in Amsterdam).

The initial study used subjects who were healthy. But the goal for this future research is to find out whether this method can actually improve the condition of people who suffer from autoimmune disorders (like rheumatoid arthritis).

Some people aren’t waiting for these results

People are actively taking control of their own health:

But it’s too cold!

The initial reaction of most people to a practice like this is:

“You’ve got to be kidding me! No way I’m going to get into ice cold water!”

Do what you can

Well, you’ll be glad to know that this is not about totally letting go of comfort.

This isn’t about “spartan living”. There’s a time and a place for everything. You can still have comfort (and hot showers for instance).

No, this practice is just about committing yourself for a short time a day to a deliberate, intentional practice. A practice with the potential to revolutionize your outlook and the way you live your life.

You only need to find your “edge”. Your edge is that place where you are challenged, where you start to think “this is impossible for me” or “I can’t do this!”.

And that edge is situated at a different place for everyone. Some need a lot of challenge, others need to face a little less cold or go a little slower.

Everybody has his own individual edge, and this is about meeting your edge. Wherever it’s situated.

As long as you’re being honest with yourself about what you can take, then it doesn’t matter how ‘much’ or ‘little’ that is.

(Because at whatever level you might be, there’s always the next level. You’ll always have an edge to explore, whether you’re considered ‘beginner” or ‘expert’.)

I know people who just take cold showers, and that seems to be enough for them to be challenged.

That’s great. This is not a race.

There’s no pressure to prove anything to anyone else.

What matters is the feeling you have, and your commitment to yourself.

Don’t underestimate yourself either

There are people who go in fully, and challenge themselves hugely.

Just be honest with yourself. If you feel you need to up your commitment, then do that.

You choose your level of challenge. Don’t go to the extreme just because others do it.

But don’t underestimate yourself either.

Sometimes it’s hard to find the motivation for things, even if we know they’re good for us. We procrastinate. We ‘forget’ about them.

If that’s the case, having support from others who cheer you on is very useful. And having people to tell your experiences to, as well as to be accountable to, can do real wonders for your commitment.

And also, while the information given on this page can put you a good way along the path, it is also useful to hear it from the ‘horses mouth’. Which in this case is Wim Hof himself:

That’s why enrolling for the Online Video Course is a powerful gestion. You’ll get all the exercises and training needed to feel physically powerful, feel mentally fit and cheerful, and to boost your immune system:

Together with the Online Video Course you also get: