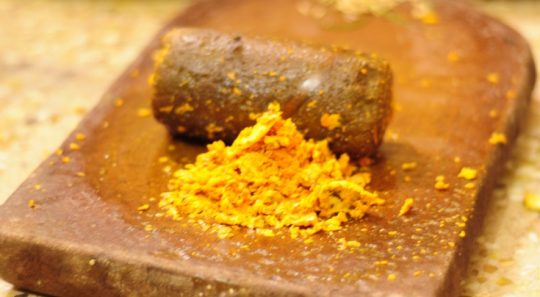 And curcumin has probably the most evidence-based literature supporting its use against cancer among all nutrients. Best of all, curcumin appears to be safe in the treatment of all cancers.

There is a huge amount of studies done on curcumin.

Studies suggest that curcumin has enormous potential in the prevention and therapy of cancer. This review describes in detail the data supporting these studies: anticancer potential of curcumin: preclinical and clinical studies.

Much attention has been paid to curcumin use for cancer prevention and treatment including leukemia, breast, colon, prostate, and pancreatic cancer.

To highlight one study: an American laboratory from 2007 researched the combination of curcumin with chemotherapy in treating bowel cancer cells. It proved that the combined treatment killed more cancer cells than just the chemotherapy alone.

GreenMedInfo.com has an enormous list of 1,456 curcumin studies, about the virtues of curcumin in general. I glanced through this list, and immediately found numerous studies that talk about curcumin’s cancer-inhibiting properties:

Curcumin has significant therapeutic activity in patients with pancreatic cancer.

Also good to note is that most of these studies have been done in laboratories and on animals. Even though trials are ongoing curcumin is not yet given as treatment in humans.

While we’re on the topic of curcumin studies, here’s a list of other health benefits that researchers have discovered. Curcumin is found to:

But back to cancer. What actually happens when curcumin combats cancer?

How does curcumin fight cancer?

The 2011 groundbreaking study by leading curcumin researcher Bharat B. Aggarwal hints at how this happens: epigenetic changes induced by curcumin and other natural compounds.

Wellness Resources sums it up:

“Epigenetic modulation”. That sounds complicated. Let’s put it in other words: curcumin has an effect on the DNA. Curcumin changes the regulation of DNA to help kill cancer. And curcumin can also help repair damaged DNA.

This all sounds great, but there’s one disadvantage of curcumin:

Curcumin has a low bioavailability. Which means that not much of it is absorbed into the body when ingested orally.

And it is also found to be poorly soluble in water as well.

But there are ways around this problem:

How to use curcumin

To start off: find a turmeric extract that contains 100 percent certified organic ingredients, with at least 95 percent curcuminoids. Avoid a product with fillers and additives.

Then, to improve the bioavailability of curcumin, you can choose one of these solutions:

You can use coconut oil, flaxseed oil, olive oil or any other source of fat you like. Egg yolks work as well.

Mix a tablespoon of the powder into 1-2 egg yolks, and a teaspoon or two of melted coconut oil. Then use a hand blender to emulsify the powder.

Piperine, a main component in black pepper, has been shown to increase curcumin bioavailability by 2000%. This is true when you’re taking the curcumin extract, but also when using the turmeric root itself in your diet.

Another strategy that can help increase absorption is to put one tablespoon of the curcumin powder into a quart of boiling water. It must be boiling when you add the powder as it will not work as well if you put it in room temperature water and heat the water and curcumin. After boiling it for ten minutes you will have created a 12 percent solution that you can drink once it has cooled down. It will have a woody taste.

The curcumin will gradually fall out of solution however. In about six hours it will be a 6 percent solution, so it’s best to drink the water within four hours.

Theracurmin is a brand name. The company that produces theracurmin uses “nanoparticle technology” that allows for increased bioavailability, and results in up to 27 times greater absorption when taken orally (as discovered in human studies).

So theracurmin is by far the most bioavailable form of curcumin, and as such it represents a major breakthrough in the use of curcumin to promote health.

Which dose to take?

Unfortunately, at the present time there really are no formulations available for the use against cancer. This is because relatively high doses are required and curcumin is not absorbed that well.

According to Dr. William LaValley, one of the leading medicine cancer physicians I personally know, typical anticancer doses are up to three grams of good bioavailable curcumin extract, three to four times daily.

“We have not been able to find a cancer we can’t effectively treat in the laboratory with curcumin,” said Aggarwal.

And because the laboratory and animal tests highly suggest that curcumin can help slow the growth of cancer cells, some people say that it can do the same in humans.

If you want to prevent or heal cancer, the studies suggest that using curcumin might be a very smart move.

At least incorporate turmeric root into your diet!

Ps. when it comes to preventing cancer there’s another, likely even more potent, nutrient. It’s one of the absolute best cancer prevention nutrients ever discovered: vitamin D.