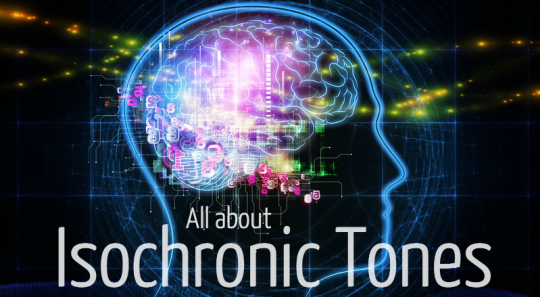 It’s night.
A fire is blazing and flickering. There is chanting and drumming…

Imagine a traditional tribe engaged in a ritual.

People are entering into a trance state because of the repetitive rhythmic patterns.

Various tribes all over the planet have, or have had, similar ceremonies, enabling people to reach such states.

Isochronic tones are a modern form of these rituals. The rhythmic pulses of sound induce a certain state in the mind of the listener.

What are isochronic tones?

Simply said, an isochronic tone is a single tone turned on and off very quickly. And in between every pulse there is silence.

The amount of pulses per second is the frequency. (E.g. 7 hz means there are 7 of these tones per second.)

The pitch (how high or low every pulse is) doesn’t influence this frequency.

Listen here for an example (no headphones are required to hear the isochronic tone – he same tone is fed into each ear):

Isochronic tones are a form of neural entrainment similar to that of binaural beats.

For clarity’s sake, I want to add a few words about the difference between binaural  beats and isochronic tones. While the goals can be the same in the two technologies, there is a difference in the actual technology, as well as in the results.

Binaural beats do not produce a single “on and off” tone like with isochronic tones, rather the binaural beat is produced from ‘feeding’ each of your ears with a different tone. For example, if we put a tone of 100 hz into one ear, and a tone of 104 hz into the other, the brain will percieve a third tone of 4 Hz. This tone is produced because of the interference between the two tones.

You have to listen with headphones for this one. You ‘hear’ a tone which is not really there, because your brain makes up the ‘vibrating’ rhythm you hear.

As a consequence of this, the resulting tone is much quieter compared to an isochronic tone. And that is, according to Dave Siever, the reason why actual brain entrainment is also less efficient with binaural beats.

Read this article for more on that topic.

How do isochronic tones work?

The brain receives the tone it is being ‘fed’ and starts to “mimick” this frequency. This phenomenon is called the “frequency following response” or just “brainwave entrainment”.

Isochronic tones benefits – why use them?

So why would you use isochronic tones at all?

The idea behind isochronic tones is for the rhythmic pulses of sound to induce a certain state of mind with the listener.

By selecting an isochronic tone of a specific frequency, you can ‘nudge’ the brain to enter the selected brainwave state.

So, there are lot of reasons why you would listen to an isochronic track. With brainwave entrainment, it is stated that you can:

It would depend on your goals.

There is some mistrust and doubt as to whether they actually work. See my other post “Do isochronic tones work?” where I look into that question.

Where to find isochronic tones?

So you want to experiment with isochronic tones. Where should you get them from?

There are a few options:

You can also find some on amazon for cheap:

MyNoise.net is a website with a free brainwave generator for your PC:
http://mynoise.net/NoiseMachines/isochronicBrainwaveGenerator.php

It also has an iOS app:
http://mynoise.net/theApp.php

This is another (and free) app that generates isochronic tones for iOS. I haven’t tested it, as I don’t have an iPhone, but here it is:

SINE is free and Open Source software distributed under the GNU GPLv3 License.

Available as a download for your PC or as an app for your smartphone:

There’s also a “webapp”, where other people have uploaded their tracks. So no app or program to download, just select your program and play directly on your smartphone or PC:

One of the tools in the Transparent Corp. toolbox, Neuro-Programmer 3 is an established program that people happily recommend.

Here’s a good example showing what Neuro-Programmer 3 is capable of:

There are 2 editions available:

Also from Transparent Corp., Mind WorkStation is the next stage after the Neuro-Programmer 3, and has plenty more functionalities.

Aside from isochronic tones, you can also program binaural beats, as well as some on-screen visualizations. Also compatible with many biofeedback devices.

And many more features!

At the time of this writing, 3 versions exist:

For more software, have a look at this wikipedia page:

Use a mind machine [most efficient]

Mind machines are probably the most efficient tools to produce brainwave entrainment with. Why?

Because they use not just isochronic tones, but also add visual stimulation in the form of flickering lights. The most efficient form of entrainment is not auditory, but visual.

As David Siever from mindalive.com says:

See the article Why Binaural Beats don’t Work as Well as These Alternatives for more about the superior results of visual stimulation.

Mind Alive, led by brainwave entrainment veteran David Siever, has been producing quality mind machines since 1984, and as such is one of the pioneers.

The Digital Audio Visual Integration Device (DAVID 1), that he created in 1984 was the first device that I know of that used both flashes of light and pulses of tones to effectively guide the user into specific brain wave patterns.

Mind Alive’s range of products has since known many new models and updates.

I personally have been using the Mindalive DAVID Paradise since about 2002 or so, and am very happy with it still (even though it’s a very old – and discontinued – device).

The most recent series is called the Delight series.

The Delight is our most easy-to-use and lowest cost device for people who want simplicity and large, easy-to-use session buttons.  — MindAlive

My understanding is that it is geared more towards people who want a quick & effective device to use in their busy daily life, as opposed to more ‘hardcore’ brainwave or biofeedback fans who really want to delve into the subject of brainwave entrainment.

The DAVID Delight comes with a whole range of prerecorded sessions, which you can simply play, without having to think about “which brainwave frequency do I have to choose now?”.  So you don’t have to know a lot about brainwaves or brainwave entrainment at all.

It has ten very effective and popular sessions – two in each category:

One downside that I personally think that this model has, it that there is no function to choose your frequency manually. You always have to choose a program, with the length of time that comes with it.

But probably this is not much of an objection, unless you are the experimenter type. If you’re just looking for a machine that will relax you, or help you focus or meditate better, then this is a perfect machine.

I also think it’s a shame that you cannot program your own sessions, unless you buy the DAVID Session Editor separately (I believe it’s about an extra 70 USD). And even if you get the Editor, you can only create an extra 5 sessions (unless you start to overwrite the pre-recorded sessions).

But, again, this drawback applies more to people wanting to experiment, than to people with little interest in the technology itself.

The DAVID Delight is Mindalive’s entry level machine: there are many more devices available.

Some are designed especially for students, some are specifically created for people with ADD/ADHD, and some come with the extra technology of CES (cranio-electrical stimulation). Professional instruments are also available.

I just want to mention one additional accessory that is available from Mindalive (an accessory which I think is excellent): the “Viewhole Eyeset”, which allows you to use your DAVID with your eyes open.

And why would you want to do that?

Some activities require that you have your eyes open, but you still want to train your brain to be in a certiain frequency. The Viewhole Eyeset is not standard included with Mindalive’s machines, but can be a great tool for certain people:

Another leading manufaturer of mind machines that has been creating quality material – with quality customer support – since 1988.

They have 3 mind machines in their arsenal:
Proteus

Their entry level machine. Comes with:

Check out the Proteus here

Probably their most popular machine.

Check out the Procyon here on Amazon.
Kasina

Their most mature product yet.

“50 audio-visual excursions, with aural backgrounds ranging from the soothing sounds of nature to ambient electronic tapestries, to embedded binaural beats and isochronic pulses… all beautifully orchestrated and synchronized to the visual experience.”

And MindPlace has truly great great customer service and support. Check out the reviews on Amazon here:

A few pro’s about MindPlace’s machines:

The entrainment effect of isochronic tones is real. Especially if you use them in conjunction with light flashes.

If you meditate, it will take you in five minutes to where you normally get in an hour.
If you study, this will boost your concentration abilities (especially with Tru-Vu eyesets from Mindalive’s machines).

I would love to see isochronic tones, and especially mind machines, being used more in healthcare and stress management… Even though there there’s a lot of proof of them providing results, it still seems to be a fringe tool of the meditator. It would be good if that would change.